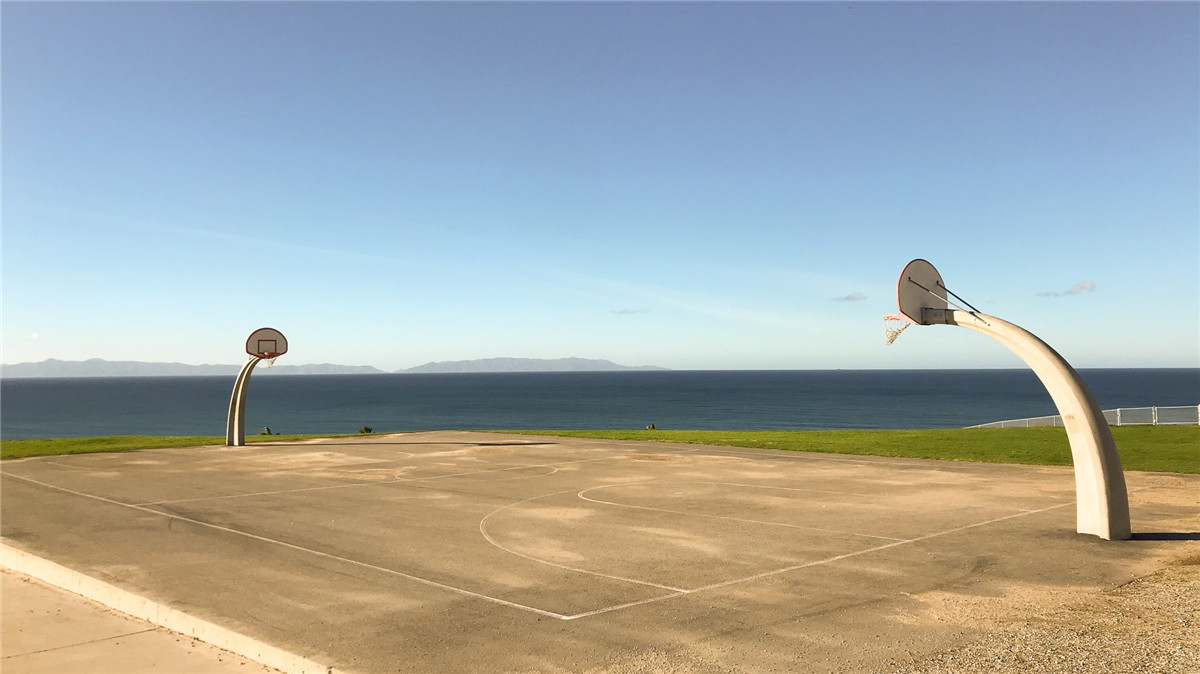 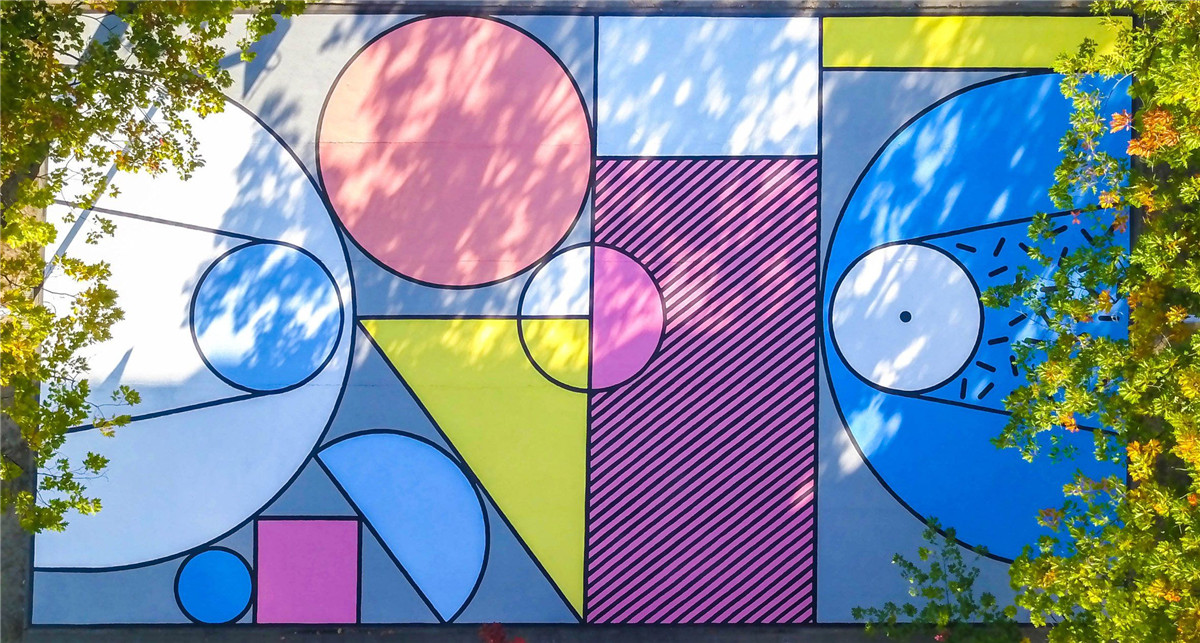 For a basketball court in Ulster, Belgium, located between a grammar school and a refugee center, muralist katrien vanderlinden has created an eye-catching geometric work of art. To complete the piece, the artist used up 137 liters of paint, filling the original court with brightly colored geometric shapes and laying out the colors in the Memphis style, which originated in the 1980s during the boom of basketball and hip hop.

The artist was inspired by the simple patterns of toy blocks, and the use of simple geometric shapes allowed the artist to explore how new shapes could be incorporated into existing patterns.

The court is a natural canvas that the designer creates in geometric shapes so that people can play basketball in it and children can play their own games in it, and it is now a great place for people to meet and children to play.

The basketball court in the Italian city of Alessandria has been transformed by Sicilian artist gue into an eye-catching maze of color. Using only simple lines and bold blocks of color, the court has taken on a new passion and rhythmic life. His main inspiration came from how to “create a sense of space passing through the court”.

The court is painted with white lines that delineate the areas and boundaries between the two sides, and bright yellow, orange, dark blue, light blue and grey blocks that blend with each other to paint the entire court. Dynamic curves and bright color blocks in this sports space together to interweave a visual rhythm, making the movement on the court more dynamic.

Victor Solomon, a Boston-based filmmaker and artist, transforms traditional stained glass into a piece of basketball hoop art with jeweled edges. In the traditional “Tiffany” style, Solomon spent nearly 100 hours designing, cutting, soldering and gilding each piece of stained glass. Each basketball stand is a work of art. 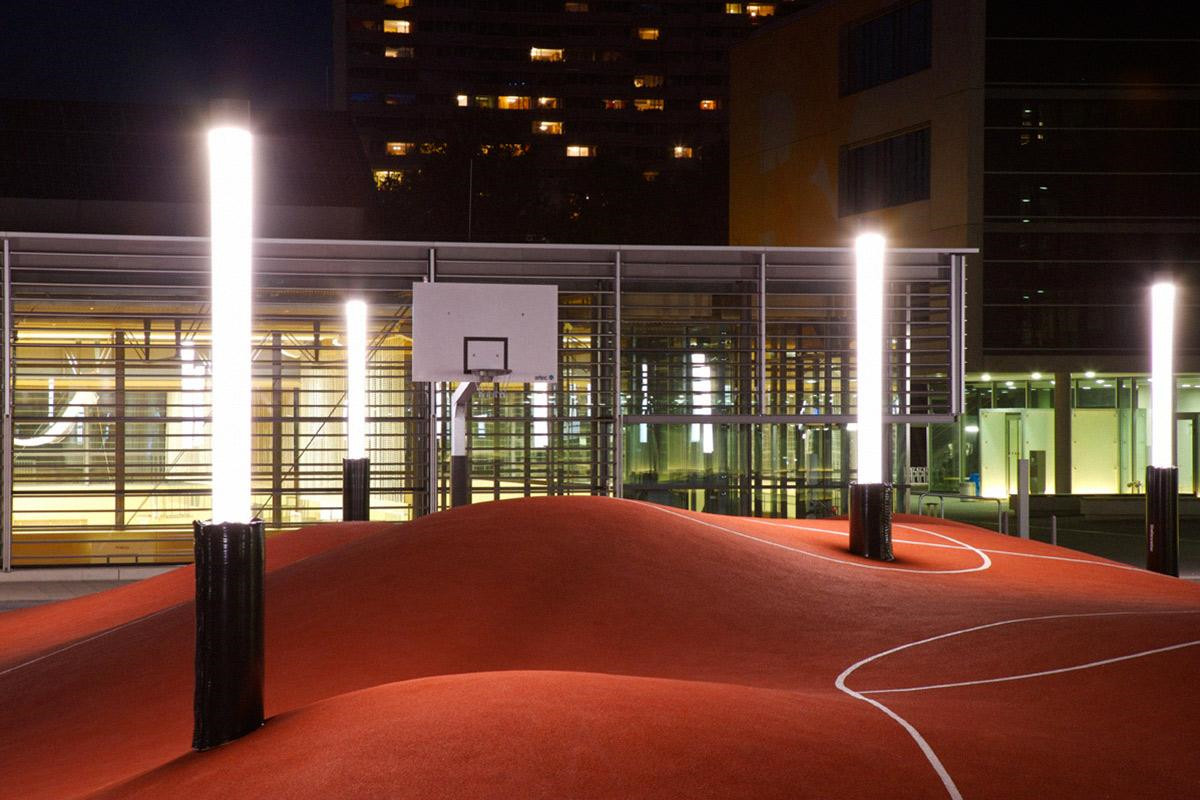 In 2015, Pigalle collaborated with French design photography studio III-Studio to design an art project for a creative basketball court, in partnership with Nike’s sponsorship. Located in the 9th arrondissement of Paris on rue du Perré, this creative court was transformed from an empty space between two old buildings.

The design of the basketball court was inspired by the famous “Sportsmen” by Kazimir Malevich, the founder of Suprematism.

The bright colors and decorative geometries create an interesting visual contrast between the “art court” and the surrounding old architecture, breaking the “stereotype” of basketball courts.

This partnership follows Nike’s sponsorship of the Pigalle court project. The court is located between two apartment buildings in Paris and is painted in a funky color to add some interest to the court. The court’s floors and walls were painted in gradient purples, sunflower yellows and bright blues, making the players feel as if they were immersed in a sunset sunset.

Whether it’s the gradient purple, blue, yellow and orange colour scheme, the more modern graphic forms or the small details such as the translucent neon purple basket backs, it’s all so refreshing.

The Regal, built by Nike, is completed at the Black Prince Community Hub in London. The stunningly beautiful court was built by Nike to promote basketball in London.

It features the unique Junckers’ new ebony flooring, which is complemented by shiny gold basketball markings. And the basketball hoop on this court is gold plated!

Teal plexiglass baskets are fitted with integrated LED lights and an electronic scoreboard. The walls of the arena are specially designed with custom floral patterns for the occasion, and one side of the wall features inspirational quotes from Lorton. The jerseys of 10 players also hang inside the arena to commemorate the glorious history of these basketball heroes.

The basketball court at Angels Gate Park, located an hour’s flight from Los Angeles on Santa Catalina Island, which is also known as a picturesque tourist destination.

Standing here looking out at the Pacific Ocean and the skyline panorama of Santa Catalina Island in the distance, basketball has become less important, and the 1998 film “One-on-One He Got Game,” starring Denzel Washington and directed by Spike Lee, was filmed here.

With the Pacific Ocean stretching out behind the court, it must be nice to sit back and enjoy the sea breeze and the sunset after a sweaty game.

A design with the same concept is also available on the left bank of the Seine. From now on, height and age are not an issue! 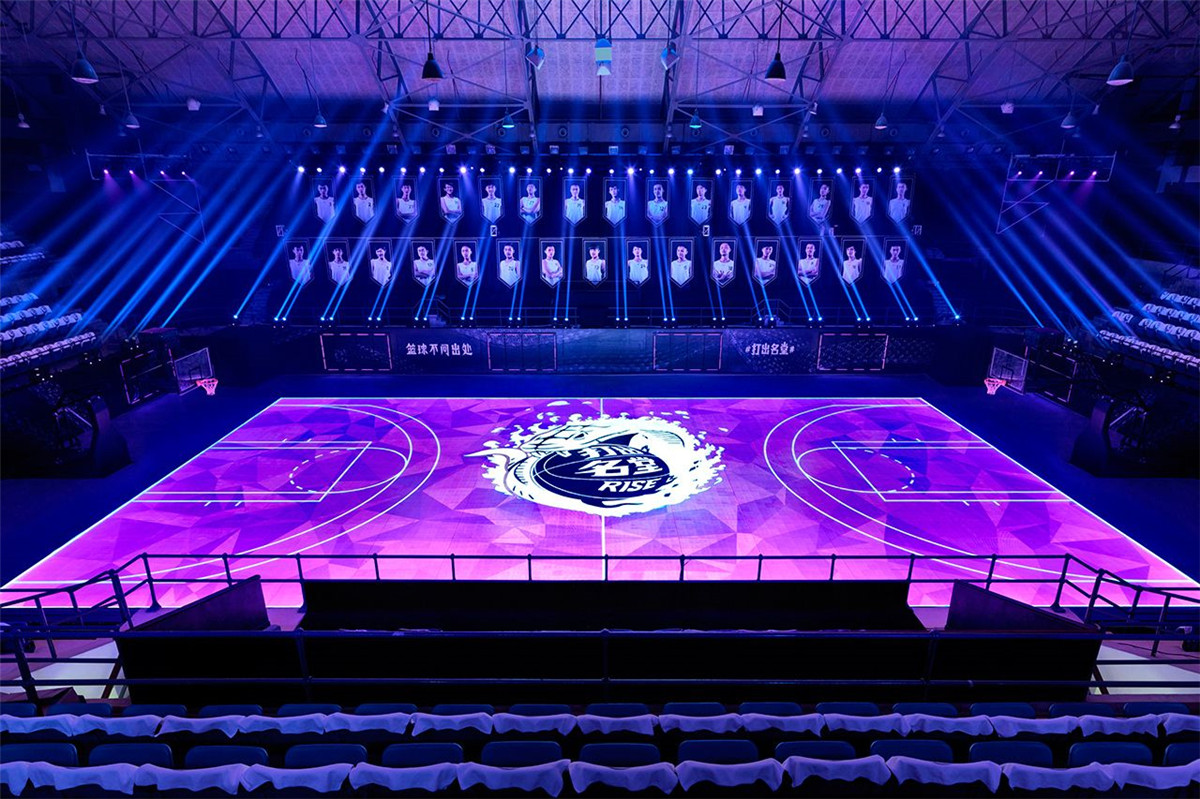 A German company called ASB Systembau has developed a new glass floor, can be designed directly on the glass surface using LED lighting to display boundaries, video messages or specific words. It is understood that this set of LED lights using the lighting system “ASB glassfloor” and to create a multi-functional stadium, using programmable lighting indoor stadium lines as well as the ability to draw video output with a specific message below the panel function of the new glass surface.

The system can be used to illuminate different areas at the touch of a switch, adapting to a wide range of sports such as badminton, basketball, indoor football or hockey, handball and volleyball.

Shanghai Black Mamba Digital Court is the world’s first smart LED court, with a specially designed underfloor covered in LED lights for a movie-like visual effect and built-in sensors that track players’ movements and sounds on the court.

Public artist town and concrete designed an installation basketball court that is suitable not only for the players, but also for the spectators. Pink doughnuts are used as elements of the fence and the supporting structure of the court to create a pink atmosphere.

Some of the flower receptacles and squares on the fence are made of thin wooden structures, wrapped in foam and covered with protective fabric, as one would typically find on poles on a sports court. From the fence, playful grills spread to the ground, with geometric shapes showing blue and pink playground markings.