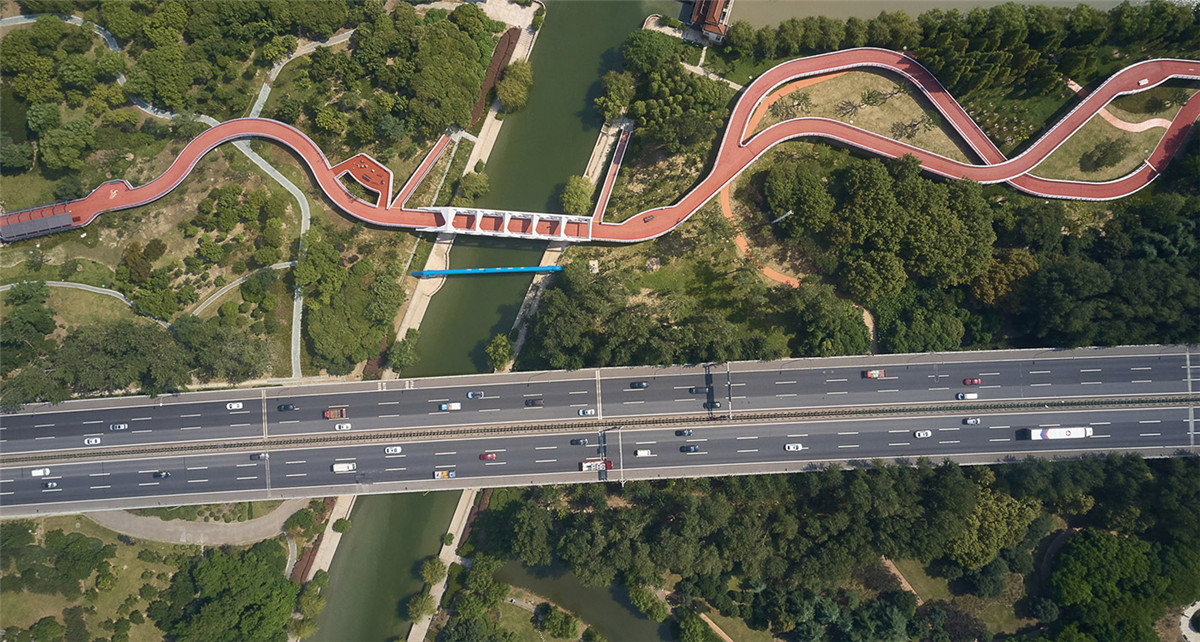 Jiangyin, a small city in the southern part of Jiangsu Province, China, has been a major river defence fortress for centuries and is now an important port for river and sea transport in the Yangtze River Delta region. Jiangyin is also a garden city and boasts a world first: the longest sports greenway in the world.

The design team from BAU, led by young Chinese architects James Brearley, a visiting professor at the Royal Melbourne Institute of Technology (RMIT) and an Australian registered architect, has woven a 4,707-meter long legend of Jiangyin, in the spirit of China’s new era of urban development.

The Jiangyin Greenway is being built at a time when China is promoting healthy, sustainable transportation and urban leisure. An urban infrastructure project of this magnitude represents an opportunity, or more accurately, a pure responsibility, to create a meaningful space in the city. With this opportunity, Jiangyin has become a city that is innovative, progressive and livable.

More than just a trail 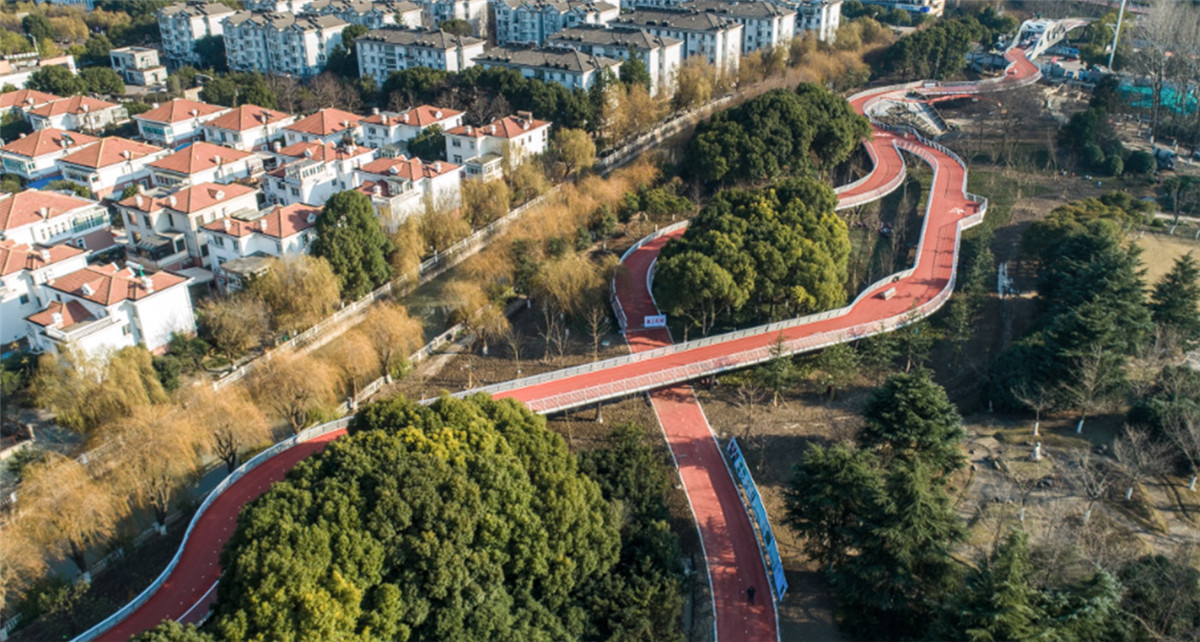 The Yangtze River is a world-renowned natural landscape. Like most natural landscapes, it is often overlooked in the hustle and bustle of the city, day in and day out. As a new addition to the city’s infrastructure, it will once again showcase the Yangtze River’s majestic and special beauty to the public. Greenways have become a common development pattern in many cities along the Yangtze and its tributaries, with plazas and terraces built longitudinally along the greenway. Visitor information panels will be placed at points of interest to illustrate the glorious history of the Yangtze.

The project site is elevated throughout the highway. Surprisingly, thanks to wise engineering decisions, the highway has not become a barrier to the city. However, the park in which the project is located does not connect the city organically. In fact, the long strip park is more of a north-south connection. As a result, the east-west connectivity is greatly hindered.

A detailed analysis of the ideal routes and paths was carried out to rejuvenate the park and make it safer. As a result, the city becomes more efficient and dynamic. In addition, connectors ensure that the greenway connects to the rest of the park, adjacent streets and the pedestrian trail network.

In general, the trail is a thoughtful and subtle treatment of the existing pathway and the abundance of mature plantings. The design clearly articulates the character of the trail: solid, transparent railings provide privacy while creating a wonderfully meandering landscape for visitors.

Highway noise walls create a sense of comfort for the trail; trees provide shade and privacy; benches at open spots overlook the lake, mountains and canals; landmark bridges are sculpturally designed with trusses; and steps at street intersections connect the existing trail with the greenway. The distinctive ancillary facilities add color to the adjacent city project.

As we all know, a good place must be a space that holds memories. However, fragmented memories cannot be called wonderful memories. A stroll along the greenway always leads to a series of events, and the amphitheater is used for performances and recreation.

Raised plazas with permanent sound equipment for public entertainment and sports fields with pitches, slides and gentle ramps for people of all ages are just a few examples. The list goes on and on, creating an unforgettable place to visit with a variety of treatments.

The potential is unlimited

In addition, at key locations, the design incorporates a number of ancillary features. The envelope structure illustrates how to take advantage of the adjacent existing road and pedestrian trail system and the new greenway’s geography. The ancillary facilities help to equip the attraction and make the critical areas more vibrant and the greenway safer and more user-friendly. In addition, the leasing of commercial projects will help reduce the operating costs of the greenway.

The proposed projects include: a bicycle station with sales and repair functions; a café-bar-restaurant; shops; a gym; and more.

Integration of all components

There are two basic ways to create large buildings and spaces – additive, which adds detail. Or, subtractively, by adding detail to a large building. Accessory projects often help to enhance the aesthetics, but are centered on the idea of combining different elements. The result is a non-integrated effect.

The project design is based on a holistic consideration of all the components and the integration of all of them into a coherent whole, transforming disorder into order. This gives diversity to the project while preserving the simple structure of the building, which allows for cost control.

The greenway is constructed with steel frames and prefabricated elements throughout, thus reducing the ecological impact on the park.

The greenway is prefabricated, which has the advantages of low maintenance cost and wear resistance.

The columns supporting the greenway will be 16 metres high, located in the centre of the area, with no head height restrictions on human activity (e.g. under ramps, etc.). For areas with head height restrictions, the spacing between columns will be increased to 32m, allowing more flexibility for socialising underneath the elevated walkway.

The bridge spans vary in size and can exceed the 32 m effective span of the greenway. To address this problem, the bridge uses three basic structures: a perforated membrane, a truss and a suspension system.

There are two membrane options: one, an intermediate span joint where the mass is large, which resembles an arched arch; and two, an increase in the mass of the support body, which acts as a tensile structure. The Warren trusses common in truss systems are replaced with a series of inclined filter membranes; the overhanging option uses braced, dynamic hanging baskets. The combined application of multiple solutions creates each bridge as a unique and beautiful landmark in the city.