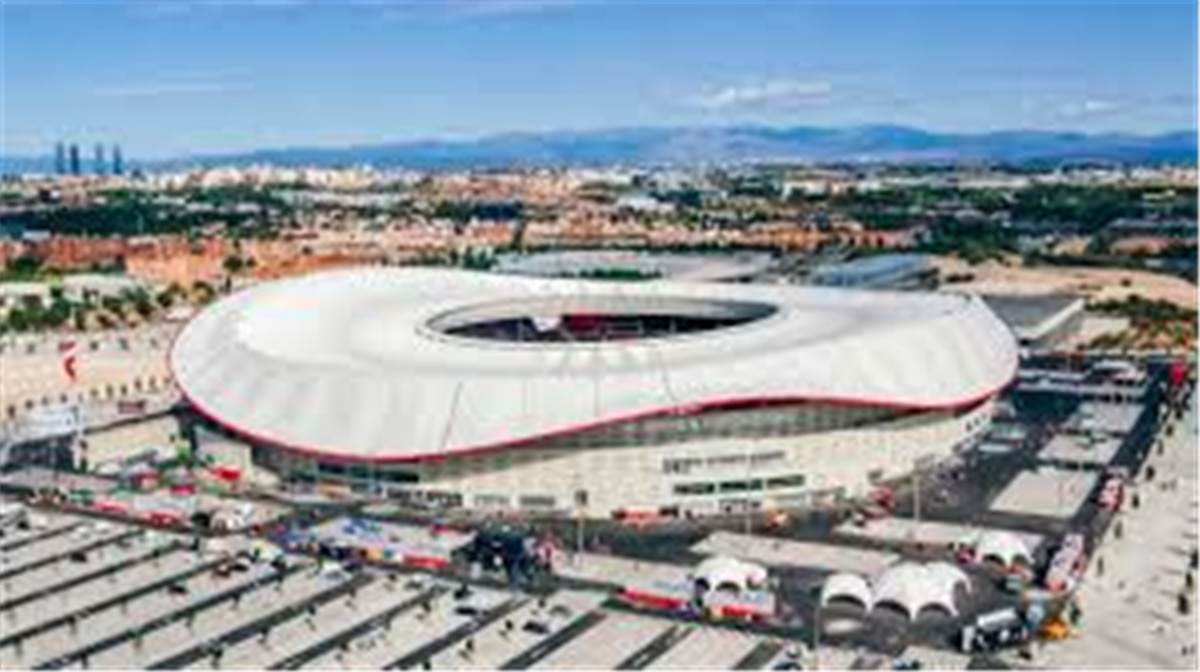 Sports architecture is one of the most complex building types, with complex technology and high project value. As large public buildings, sports buildings not only have complex functions, but also carry many social responsibilities and emotional sustenance for people, and their development to some extent reflects the most advanced contemporary design concepts, structural technology, and people’s increasing spiritual and cultural needs, so come and take a look at these beautiful sports buildings with your editor.

The stadium is a 40,000-seat football stadium being built by zaha hadid associates for the 2022 world cup. The stadium’s retractable roof was designed by german engineering firm schlaich bergermann partner and the stadium also includes a seat cooling system to ensure that the stadium can be used during the summer months in qatar.

This retractable roof is covered with folded polytetrafluoroethylene (ptfe) sheets and cables. When it is unfolded, the roof resembles a sail over the stadium, which creates a sheltered environment for football matches during the summer months. Passive design principles as well as computer modelling and wind tunnel testing allowed the physical shell to be used to maximum effect to ensure the comfort of players and spectators.

The national stadium in brasilia was designed by gmp architects in collaboration with schlaich bergermann und partner (sbp agency). Located on the site of the former manegarincha national stadium, the 72,000-seat stadium was designed by gmp architects and sbp with the introduction of the brazilian pillar forest and the structural design of the double skin cantilevered roof.

The design takes due account of the site’s architectural history and establishes a clear link with the city’s traditions, while maintaining its distinctive contemporary style. The national stadium, the largest building in brasilia, is located on the city’s central axis, and the building blocks, although large in composition, are organically integrated into the urban environment. To achieve this, the main body of the stadium’s auditorium is surrounded by a pedestrian walkway that connects all the entrance settings.

On the one hand, it can not only meet the requirements of professional sports events and provide a high-level training base for professional sports teams, but also provide the city with a new urban tourism destination that integrates winter and summer, sports, entertainment, catering, accommodation and shopping after the event.

Based on this positioning, the design draws inspiration from the unique regional scenery and traditional culture of xinjiang, and closely follows the main body of ice and snow, putting forward the design concept of “Silk, road, flower and valley” To showcase the splendid culture and regional beauty of xinjiang.

The designers extracted the design inspiration from the unique snowy mountains and gobi landscape in xinjiang, the pure white roof outlines the intention of the natural snow cap shape, the horizontal lines of the layer treatment to simulate the unique rock formations of the gobi geomorphology, to echo the regional characteristics of the glass simulation of snow and ice crystals. The whole building complex seems to be hidden in the white snow, the image of the facade is uncluttered, elegant and dynamic, harmoniously blending with the environment, fully realizing the mood of the “Snow village at the foot of the tianshan mountains”. 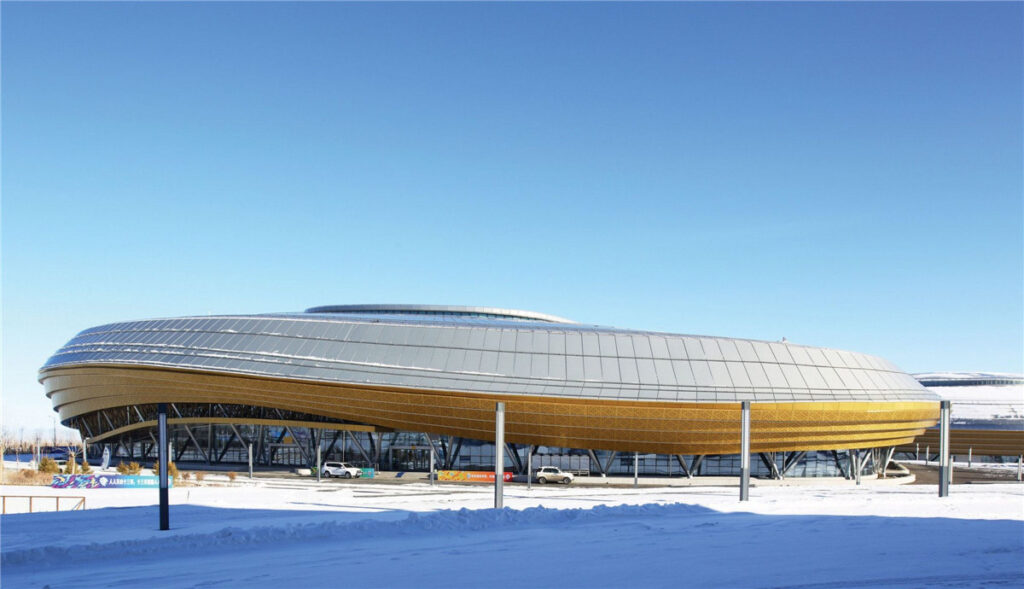 The stadium unfolds into its surroundings in a distinctive cup shape that draws the eye. The stands are supported by slender reinforced concrete towers with an overhanging butterfly roof, which, despite their size, creates a band of shadow between them, giving a sense of lightness. The aluminium panels used in all directions under the roof, echoing the reinforced concrete and steel structural elements, present a simple, austere texture in geometric forms.

The project was an extension and renovation of the former stadium, which was located on the axis of moscow’s master plan and connected to landmarks such as the kremlin, the cathedral of christ the saviour and moscow state university. 2013 saw the closure for renovation and in 2018 the stadium was transformed into a venue for the world cup football tournament and the spectacular world cup final.

The exterior of the stadium has been carefully preserved, including the colonnade that surrounds the stadium, the interior walls, and the shape and sculptural form of the roof. Behind the historic high walls, a new interior corridor has been designed. The new element of the façade is a metal bar with a pleated edge on which the symbols of various sports are presented. In addition, the stadium was designed with a 23-meter-high observation deck, which allows one to look out over sparrow hill, the university and the city centre.

Linxia olympic sports center stadium is located in the core area of linxia new town, the project covers an area of 41134 square meters, with a total construction area of 28452 square meters. The building is composed of spectator seats and an international standard stadium. It is a large sports facility that mainly focuses on large and medium-sized sports competitions and training, taking into account the public’s leisure, fitness, entertainment and other functions in one, with a total seating capacity of 20,410 seats. The project is now completed, and has become one of the landmark cultural facilities in linxia.

The architecture is inspired by the characteristics of linxia hezhou: Peony, pottery and painting. The design takes the peony flower as the theme and adopts the peony petal structure system, the outer petal is a thin shell space, which can be expressed as a reasonably large span structure with a very beautiful shape. The shape is inspired by the rounded arcs of the pottery, which is closely integrated with the internal functional arrangement. The design integrates the form of the long-span structure and the use of space, to reflect the strength and logic of the structure, and to achieve economy and comfort in the large space.

This project is also a renovation project and the architects wanted to transform it into an open, sports venue that is connected to the city. The scheme entailed the creation of an expansive public space with an adjacent garden that could accommodate up to 5,000 visitors.

Inspired by these characteristic 19th century conservatories constructed of glass and cast iron, the new building features a new tennis court section below ground level, surrounded by a trapezoidal concrete deck, topped by a steel structure and wrapped in a plant greenhouse to meet the highest technical specifications.

The overall design is circular, centred around an enclosed garden, providing natural light inside and outside the building, as well as allowing a smooth flow of circulation between the various functional areas or campuses. The building is made up of circular volumes stacked on top of each other, and a semi-ring-shaped volume “Wraps” Around the two floors, separating the exterior and linking the space and natural light between the two volumes.

This project is an extension of the original building, which was built in 1994 in the old stadium in madrid. The new stadium will have a capacity of approximately 70,000 spectators and will be built to the highest standard for champions league (uefa champions league) final-level matches.

The expansion of the stadium was designed with two objectives in mind. On the one hand, to retain the recognisable elements of the old stadium, and on the other hand, to integrate the extension into the old stadium to form a harmonious whole, the design is a perfect match between the old and new parts of the stadium and expresses the new image of atletico madrid.

Combining the theory of “Space efficiency”, the design first analyzes, combines and compares different functional elements of the building to optimize the functional organization mode of the stadium, and develops a “Complex” Functional system with flexibility and efficiency.

Sports is the product of socio-economic development to a certain extent and is the demand of people’s increasing life. The construction of sports stadiums is related to the local image and whether it can meet people’s health requirements, and is a new landmark of a city. Only when the local characteristics are satisfied and the needs of function, appearance and economy are fully considered in the construction, can a representative stadium be built.