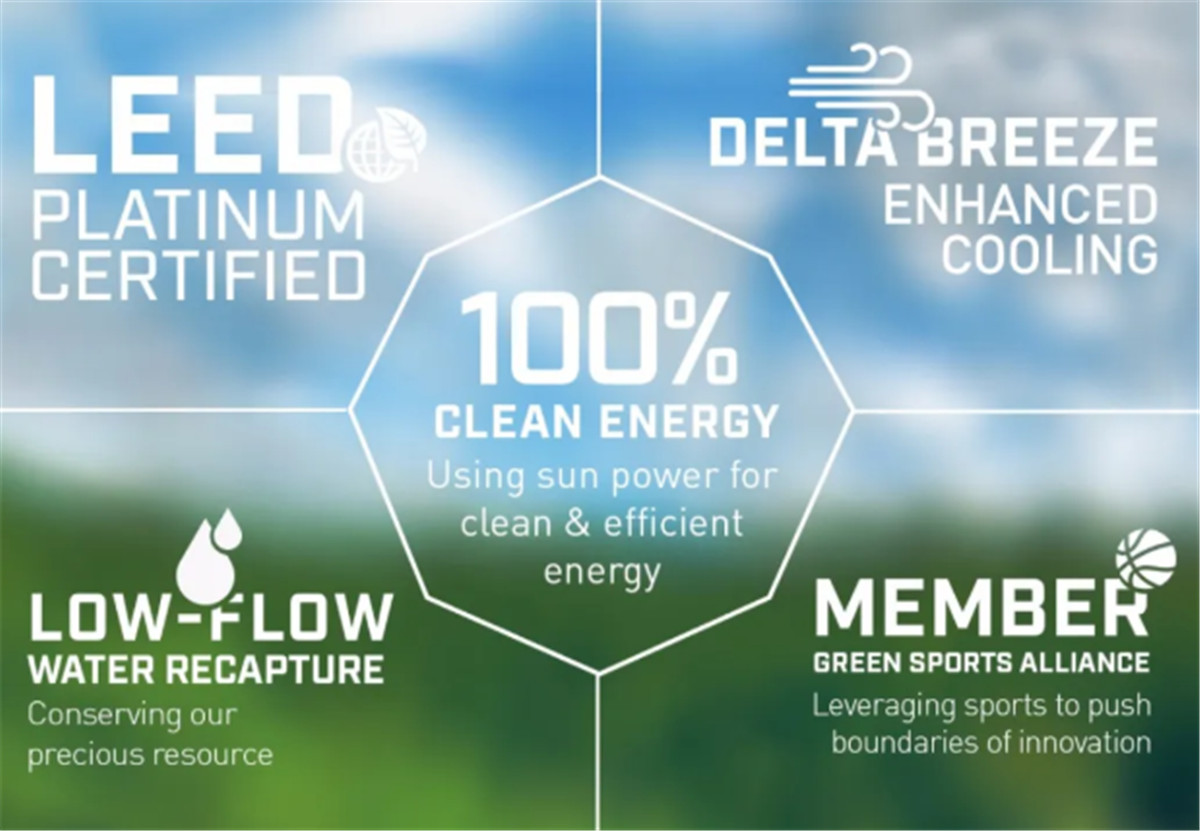 Sacramento’s One Golden Center is known as one of the most technologically advanced, user-friendly and intelligent arenas in the world today.

The $557 million, 17,500-seat multi-purpose arena is home to the NBA’s Sacramento Kings and a smart venue for world-class basketball games, concerts and major events.

In the view of Zhou Boqui, deputy general manager of Shanghai Jusco Smart Sports Co., two core elements are needed to build a smart arena: rich experience in arena operation and a variety of mature and creative technological strength. The owner of Golden One Center, Vivek Ranadive, is an IT industry tycoon, so making Golden One Center a smart venue has the core element of technical and technological strength.

Ross Blunt, the venue’s design lead, said, “We wanted to take a sports venue, which is usually seen as an inward-looking building, and really connect it to the city.”

The Golden One Center and the LALive in Los Angeles both share the characteristic of being located in the heart of the city, in downtown Sacramento, California, partly on the site of the former Downtown Plaza Mall.

The ballpark is part of Sacramento’s “Downtown Complex,” with the “One Golden Center” stadium as the core, creating a retail, hotel, residential, office, arts and leisure complex with high-end department stores, high-tech office buildings, luxury condominiums and upscale hotels. It is an urban sports complex with high-end department stores, high-tech offices, luxury apartments and high-end hotels, including retail, hotel, residential, office, art and leisure, which is like the urban living room of Sacheng.

“This is for a city’s development is to play a role in enhancing the utility, can be convenient and efficient to enhance the city’s social and cultural sports benefits, and at the same time can play the effect of the city’s business card.”

As the venue is sunken, most of the seats and the central court are located below the street level, without the traditional front or back door setup, the dome is connected to the whole surrounding area without a sense of fragmentation. A series of underground tunnels surround the sunken stadium, allowing maintenance and transportation to take place out of sight and without disturbing street-level activity and pedestrians. The open layout of the concourse also encourages fans to wander around throughout the game or concert.

The public plaza outside of the central stadium leads directly to the surrounding light rail station, and the extensive bicycle valet parking system and nearby train station make this area easily accessible to locals and has the potential to be a residential development center for long term living, and the commercial area around the stadium is not the nightlife district that usually springs up around new stadium developments, but rather a more “traditional Urbanism”.

The events are a major engine for bringing in traffic and driving consumption in the surrounding area, and the entire complex is thus driven by consumption. In the first full year of the arena’s existence, Golden One attracted more than 1.6 million people in terms of ticket sales, with Kings games filling up in the fourth quarter of 2017. Restaurants near the arena benefited from the opening of Golden One, with sales at the top 10 downtown restaurants increasing by nearly 40 percent. in the second quarter of 2018, Golden One Center hosted 26 events, attracting 193,000 visitors to downtown Sacramento. In addition, the property hotel completed its second full quarter of operations and produced strong results, including a quarterly average daily rate of $211 and 74.3% occupancy. The mixed-use operations at One Golden Center delivered an outstanding performance. 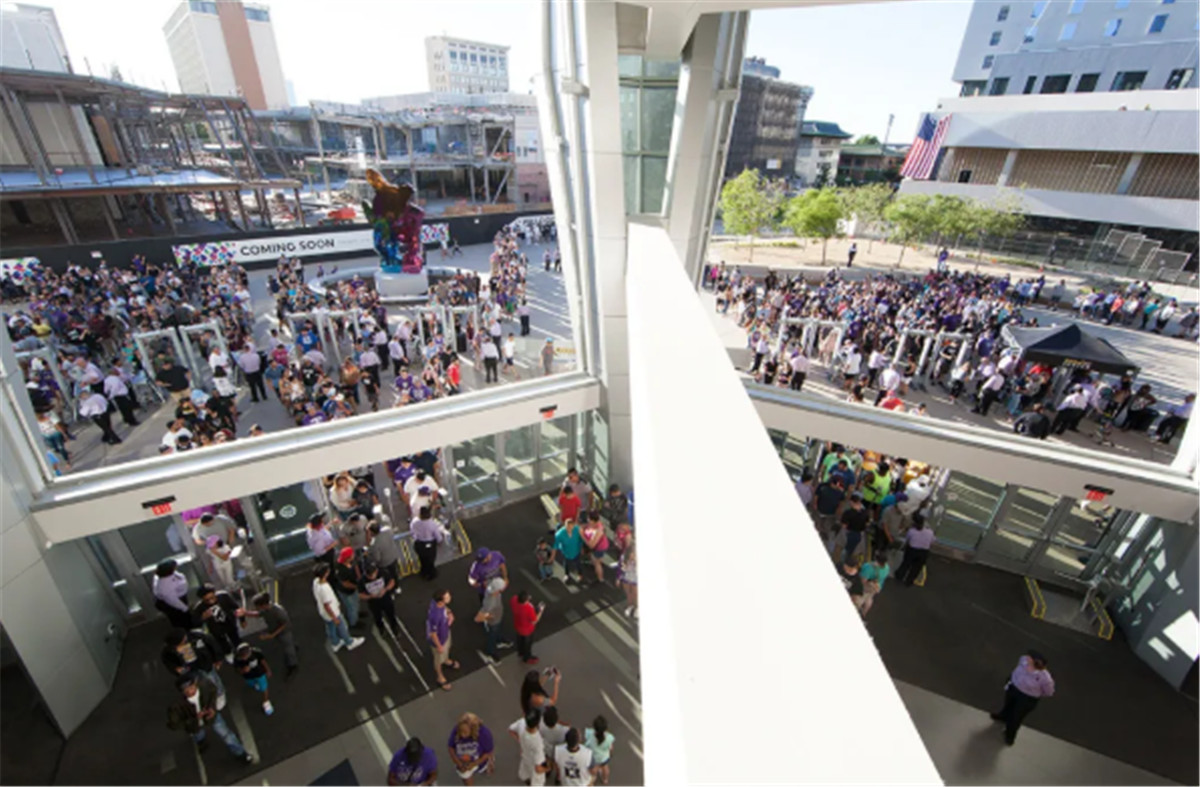 The most anticipated sports venue in China to reach the same human geography as Golden One Center and LALive and positioned as an urban sports and cultural complex is the Xujiahui Sports Park, a major project of the current Shanghai sports reform and development plan, which is located in the heart of Shanghai and will be built as a new landmark for the future and It will be a new landmark and a world-class sports complex for the future, becoming “a center of excellence for sports events, an active sports paradise for the public, and a classic sports cultural landmark.

Light speed network is the foundation of intelligence

The official boast of “the world’s most connected indoor sports and entertainment venue” comes from the speed-of-light Wi-Fi network, which is not only a bandwidth that can be loaded for the venue or even a small city, but also a full cell phone signal in the bathroom corner of the venue. The venue’s pre-installed broadband can meet the network needs of technological innovation for the next 20 years, and the Wi-Fi network is capable of hosting social media networks with massive images and videos at speeds 17,000 times faster than the average home, and can handle more than 225,000 posts per second on Instagram.

The superior network conditions guarantee the operation of a series of cutting-edge IoT and cloud technologies in the arena, integrating the Golden 1 Center arena with ticketing and food and beverage vending services systems into one, giving the audience a tangible experience while every facility in and around the arena forms part of the IoT.

The automatically updated building control system used in the Golden One Center allows the stadium manager to control energy-saving LED switches, detect the status of solar energy utilization displayed on the smart dashboard, and cool the arena with natural breezes by controlling the opening and closing of the stadium’s five hanging doors. The entrance also includes a “smart turnstile” security system with face recognition.

Inside the arena, superior network conditions guarantee “4K Ultra HD” playback on the various large screens in the center court. Included is an 84-foot-wide billboard and video screen covering 6,100 square feet (570 square meters), with a 44-foot-wide, 24-foot-tall main screen and a 6-foot-tall message board on top. In addition to the main scoreboard, two 25-foot video screens welcome spectators, 600 high-definition displays are placed in the concourse, clubs and boxes, and more than 1,500 feet of signage is installed throughout the arena to provide a better visual impact for fans in all seats.

It is an industry consensus that the network is a sufficient necessity to create a smart arena in the future. With the advent of the 5G era, the 2022 Beijing Winter Olympics venues are already exploring the combination of 5G infrastructure technology and smart venues, under the slogan of “Smart Winter Olympics”. “5G has the characteristics of high bandwidth, high capacity and low latency compared to 4G and Wi-Fi, of which the advantages of high capacity and low latency are the characteristics needed for smart venues, for example, high capacity means that more devices can be connected at the same time; low latency means that the interaction between the audience and the event can be better experienced, so 5G is a very important advancement factor for the future development of venues. a very important progressive factor.” 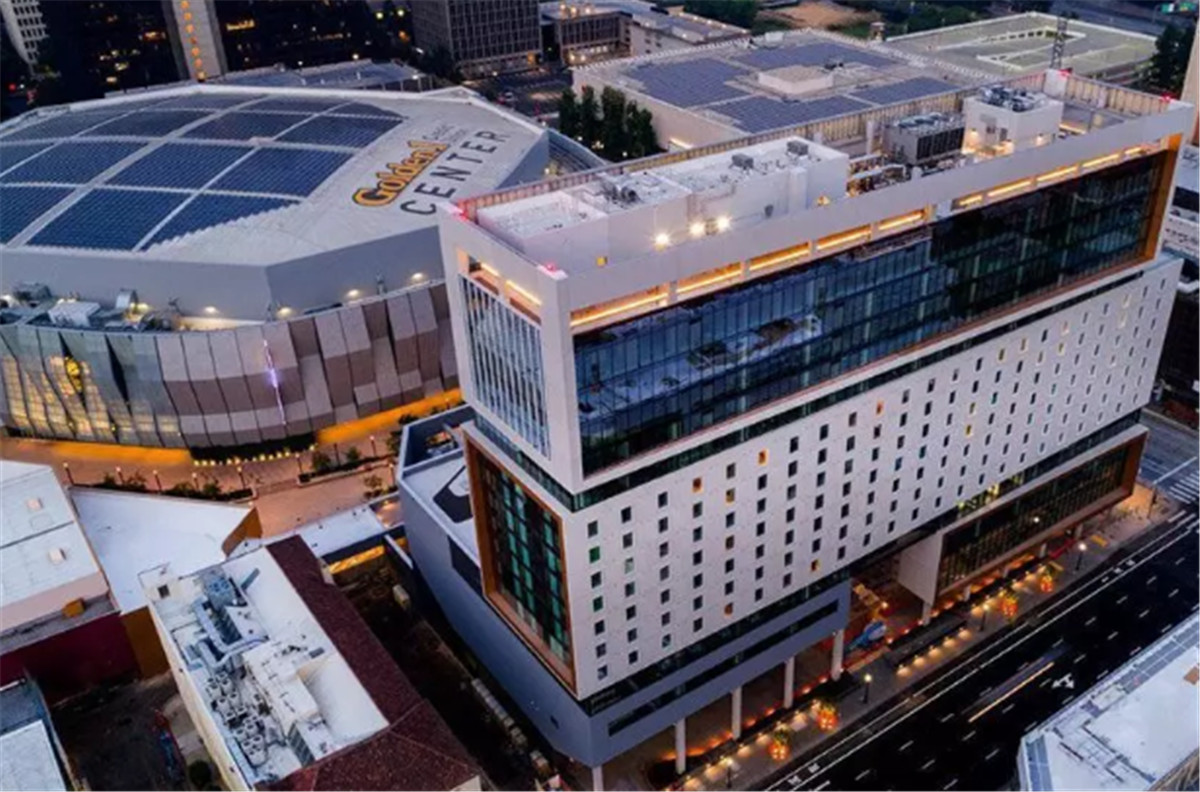 The road in the distance knows how to go, while the road in front of us is heavy on every solid step. This year, Jusco Smart Sports will assist Xujiahui Sports Park East Asia Building and Pudong Football Stadium with the deployment of Wi-Fi network in the role of weak electrical consulting. In Zhou Bo Kui’s view, the venue to meet the needs of the audience to access the Internet at any time, is one of the necessary conditions for the smart venues, which is the most basic for the smart venues built by Jussi Smart Sports.

In the U.S., watching games in stadiums competes with the strong “living room culture” in the U.S. In order to make the live experience on event days (including commuting, finding seats and dealing with crowds) compete with couches and big screens in basements and attract crowds from living rooms to stadiums, stadiums need to facilitate game viewing and enhance the irreplaceable technology experience.

The popularity of the Golden One is also due to an app that offers fans a new level of interactivity, from placing orders for tickets and reserving parking, scanning electronic tickets for admission and having the app automatically show the best route to your seat, monitoring restroom lines, purchasing food and beverage snacks (place an order on your phone and have it delivered to your seat), to watching replays, viewing statistics and watching different camera angles.

The phone is like a remote control and the stadium is the living room of the public. Both the viewing experience and arena support services are maximized.” People look at their phones hundreds of times a day, and we can’t change that,” Ranadive said, “but we can give them entertainment options that they have right at home, and you can consume whatever you want.”

It’s all part of the living room concept, and viewers can even bid through the app – they place bets with points from the app, not real currency – but it helps increase engagement and gives fans another entertainment option. The Gold One Center even has an open API and invites fans to use stadium data to create their own apps.

While apps are already standard in smart arenas internationally, it’s a different story at home. “There are almost few domestic venues that have reached a high frequency of use similar to U.S. stadiums, and most domestic venues are at best on simple WeChat applets or only WeChat public numbers.” This status quo is not only because the domestic country sports consumption habits are still in the cultivation period, supply and demand did not reach the breaking point. The best solution at this stage is to cut from the B-side, which is the fast track for the construction of smart venues in China, Jiushi wisdom sports in this piece has been more than two years of strategic deep plowing, through the establishment of the cloud service platform, the Yangtze River Delta region and even the country’s large stadiums, large events to achieve management information, to help promote the construction of smart venues. No matter it is C- or B-side, the important purpose of informatization construction is to improve the user experience of events, meanwhile, the sunken user data can help venues realize all-dimensional and all-round links with fans through big data analysis, from contacting fans, identifying fans, grouping fans, understanding fans to pushing customized content and analyzing fan loyalty, etc., which can enhance user stickiness and consumption experience at the same time, indirectly For the venue’s direct customers (organizers, titleholders, sponsors) can bring direct economic benefits. 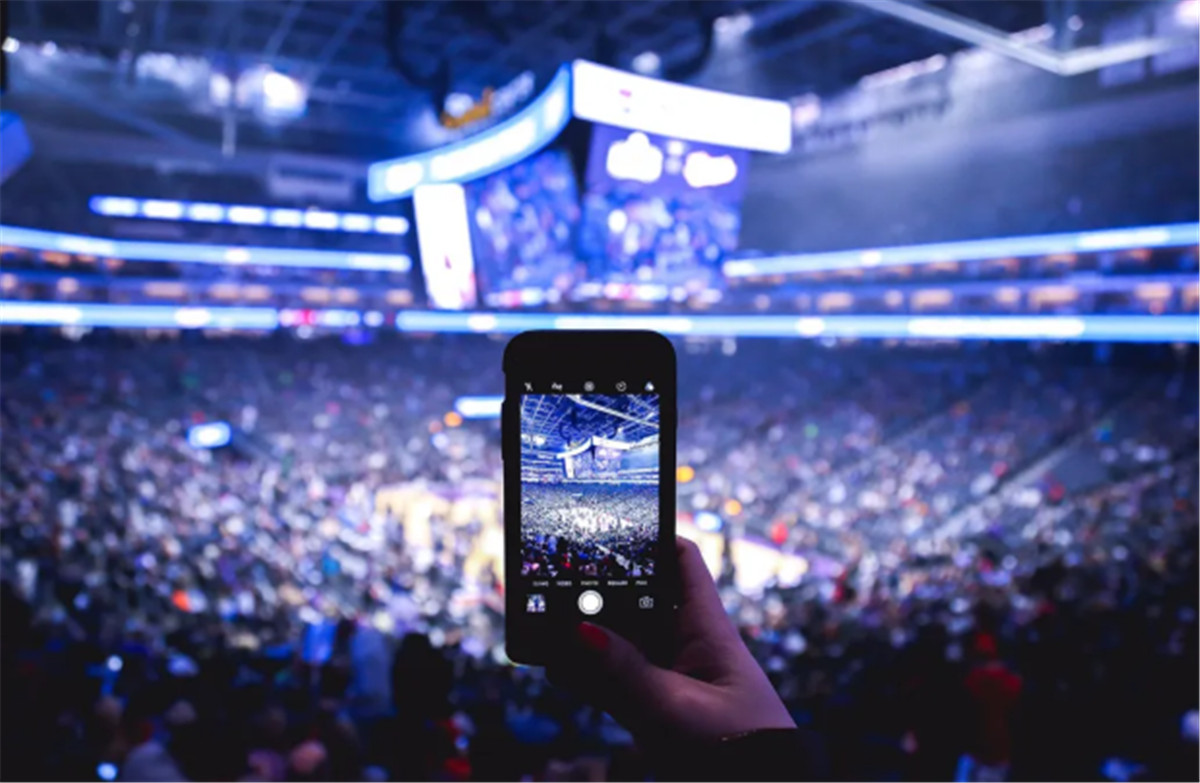 These miracles were made possible by the construction designers’ dedication to the key words “technology” and “sustainability”, which required in-depth research and understanding of the stadium’s operational lifecycle, Internet and wisdom in the early stages.

In the future, Jusei Smart Sports will invest more resources in the design and implementation of smart venues to help domestic stadiums move towards the top smart venues in Europe and America.