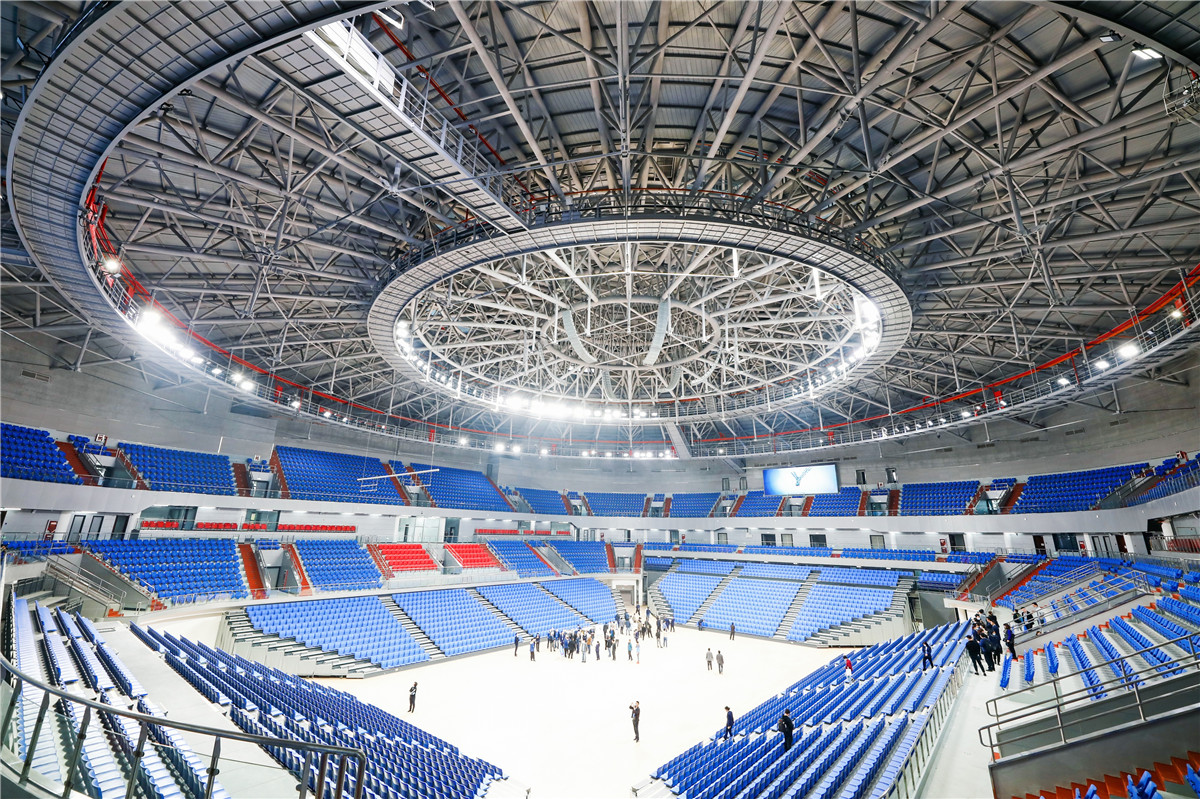 A stadium project is a large span space prestressed cable truss structure with a vector height of 25.3m, a transverse length of 239.8m and a longitudinal length of 141.6m. With a total construction area of 72,010m2, it is a Grade A stadium with a capacity of 9,842 seats. The structure includes the roof of the gymnasium, the roof of the exhibition hall and the enclosure of the gymnasium.

Introduction of the tension string truss

The gymnasium consists of three major parts: ring joist, tension chord joist and radial joist. The roof prestressed steel structure consists of 10 bays of tension chord trusses, consisting of upper chord stiffeners, lower chord cables and the braces between them, the upper chord is an inverted triangular truss and the lower chord cables are double cables with cold-cast anchors. The ten-bay truss has different spans and under the same cable equivalent pre-tensioning (1700KN), the cable force varies greatly, which poses higher requirements on how to organise the construction. 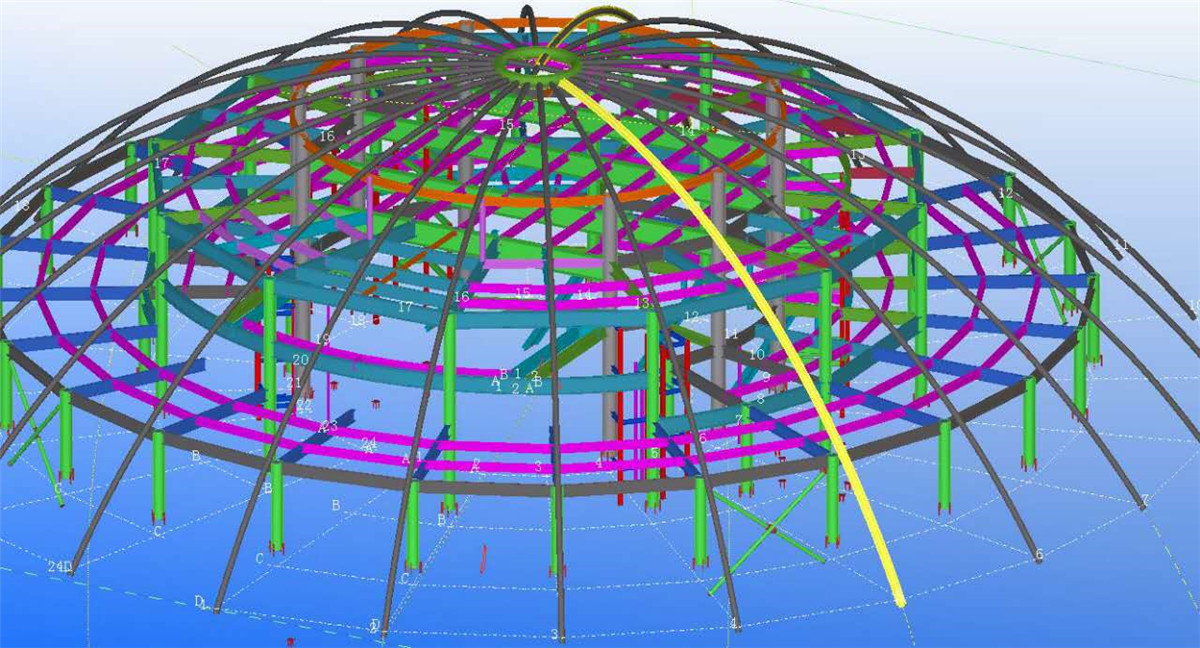 A stadium is divided into 4,553 hoisting units, of which 1,443 are in the stadium. By analyzing the lifting capacity of the representative steel lifting units and lifting machinery in this project, one 120-ton automobile crane, one 100-ton crawler crane and two QTZ-63 tower cranes were finally selected as the main construction machinery.

The I-beam frame is made of I-beam, consisting of columns, supports and positioning blocks and movable bolts, with adjustable supports on the bull leg part of the frame. When assembling the trusses, a gap is set at the disconnecting surface to leave space for welding, so that the welders can carry out the welding on the temporary platform when welding under the butt joint.

Before fabrication, each tension chord truss is numbered, and each section of truss with different types and sizes of bars is physically placed according to the design deepening drawings. Before setting up, firstly, pad the trestle according to the elevation and axis of the segmental points of the tension chord beam so that the elevation basically reaches the design position, and then make fine adjustment after setting up. When in position, attention is paid to the control of the gap and elevation of the interface, and the position of the segmental points is basically at the centre of the frame. After adjustment and alignment, welding is carried out and the welded joints are polished to a smooth transition. During the fabrication process, in order to ensure that the curvature of the tension chord beam in its original state is in accordance with the design, a longitude and latitude meter and level were used on site to accurately locate the truss assembly process to meet the design requirements.

Considering the large span of single joist, in order to facilitate construction and temporary load-bearing, temporary bracing frames are set up at the segmental points of each joist, each bracing frame is made of two round steel pipes of 350mm in diameter and 8mm in wall thickness, which are connected and fixed with ∟50×5 angles in the middle. A climbing ladder is set on the temporary support frame and an operating platform is set at the top.

Lifting and assembling of tension trusses

The construction sequence of the tensioned truss is from both sides to the middle, and the tensioned truss is lifted in four sections per bay, using a 120 tonne vehicle crane and a 100 tonne crawler crane to travel within the span, and laying steel roadbed boxes at the crane travel and lifting stations. At the same time, the QTZ-63 tower crane on site was used to cooperate in the lifting.

In order to ensure that the joist will not be destabilized out of plane and to guarantee the safety of the joist lifting, the tension chord joist is lifted in four points. After the tension chord joist is lifted into position, it is corrected in time according to the measured positioning axis at the top of the support frame by using the hand chain hoist and the interface part is temporarily fixed with the support frame and the interface is welded.

During lifting, removable movable lugs are installed on the top chord of the joist. This not only reduces the workload and material consumption during the fabrication of the joist, but also eliminates the need to cut off the joist after hoisting, which reduces the work process and speeds up the construction process and avoids the possible damage to the coating layer caused by the wire rope tying method of hoisting.

After the first joist is fixed, the second joist is lifted, positioned and reinforced, and the support system between the joists is connected in time. When the two joists and the intermediate bracing system and purlins are all connected and installed, the next joist will be lifted into position after checking that there are no safety hazards in the details. 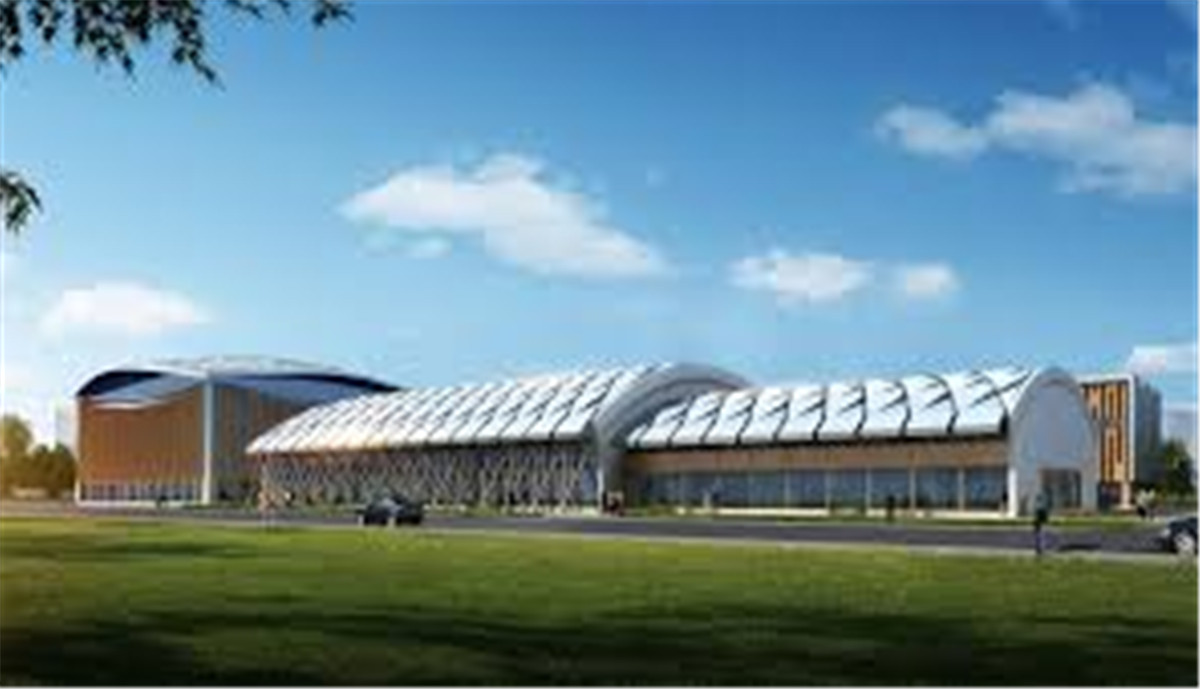 Installation and tensioning of prestressing cables

During construction, the ground numbered braces are lifted one by one with a crane or manual hoist, and the nodes on the braces are connected to the steel structure. Multiple hoists are used to lift the cables and connect them to the clamps at the lower end of the spars. The position of the clamps to the cables is determined according to the markings on the surface of the cable skin and the clamps are installed.

There are 10 ties in this project. According to the construction organisation plan and the actual situation of the structural form, it is difficult to tension these ties simultaneously and they need to be tensioned in batches. Considering the symmetry of the structure, the cables were divided into 5 batches, the number of cables in the same batch was 2, and the batch tensioning sequence was symmetrical from both ends to the middle. In order to ensure synchronisation of tensioning, the same batch was tensioned in five stages as follows: 0% → 25% → 50% → 75% → 90% → 100%.

The large span of the gymnasium tension chord truss structure of this stadium project requires high construction accuracy and is difficult to construct. Simulation calculations were carried out for the whole construction process, a scientific and feasible construction plan was formulated, and good results were obtained through strict process measures and technical management means, while valuable construction experience was accumulated, which is an important reference value for the design and construction of related projects in the future.