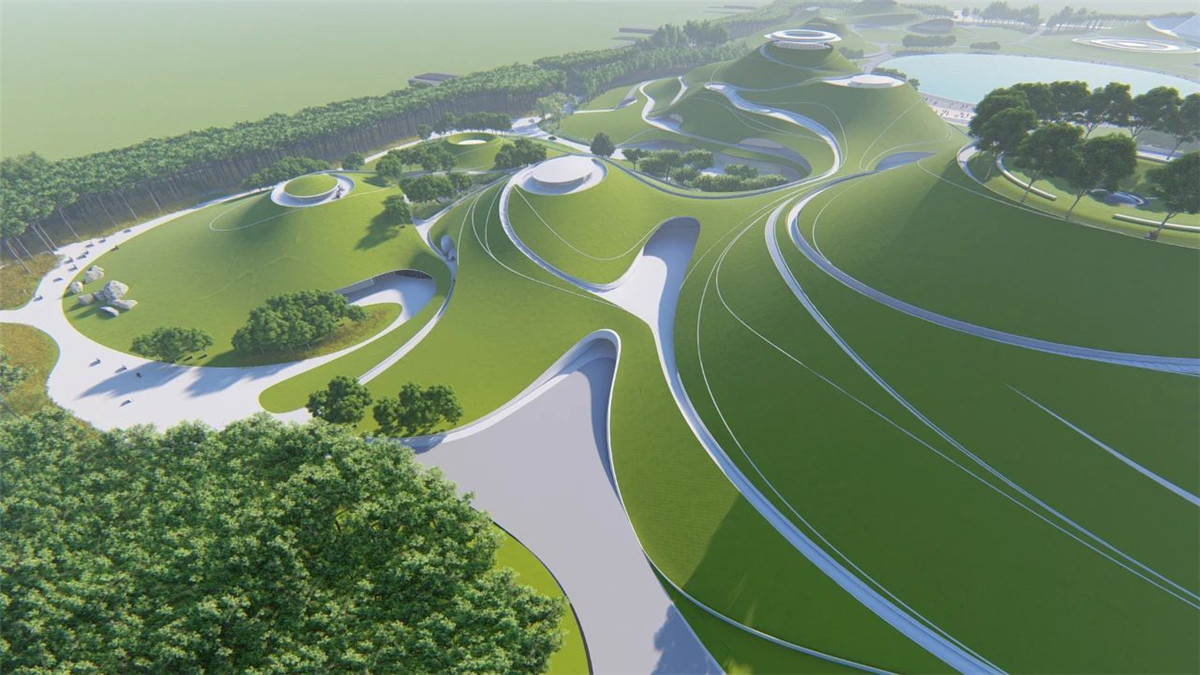 Athletics has a history almost as old as human urban civilization. It was born out of man’s desire to explore and push the boundaries of his own existence and functioning in the face of the great unknown of nature. In a way, the competitive spirit it represents has catalyzed modern society. Between people, businesses, cities, countries, “Competition” Has become a catalyst for progress, but also a drawback. 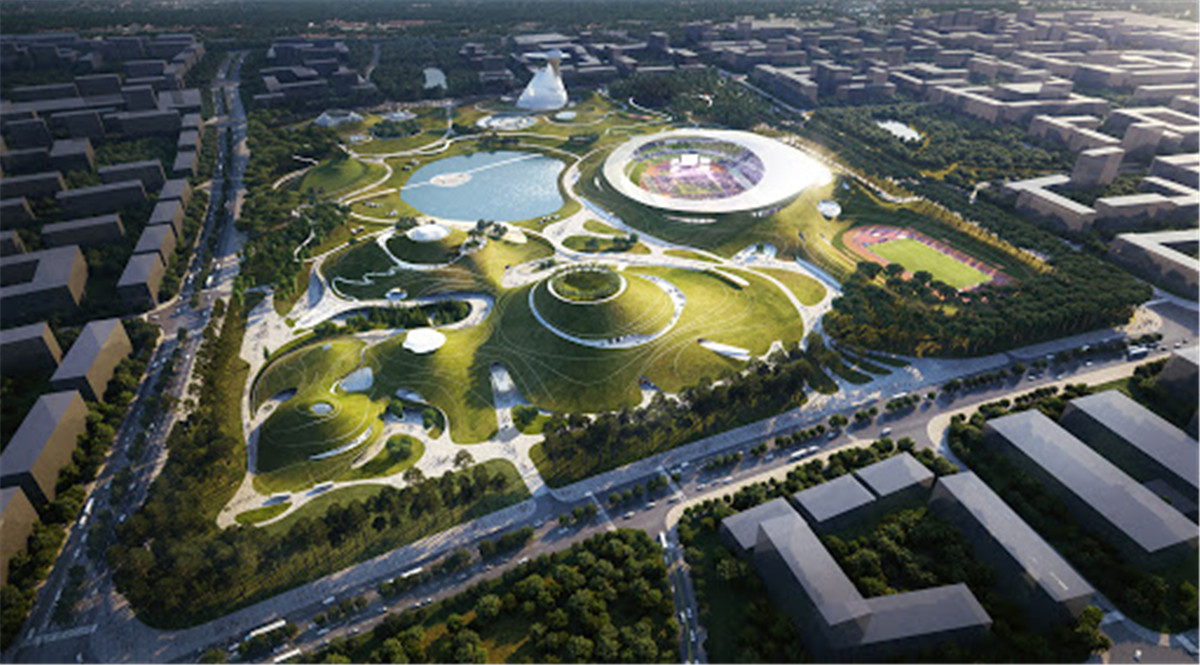 When designing one (or several) stadiums, we should return the architecture to the essence of “A place for people to gather and play sports”, conceal the power and muscularity of the “Arena”, and start from the architect’s imagination of the city’s future, bring the competition of sports stars and the daily sports of people’s life to the same interface, let the architecture itself and the construction skills “Disappear” In human behavior and higher spiritual pursuit, so as to inspire the birth of a new urban civilization.

Mad, led by ma yansong, is building a “Disappearing” Stadium – quzhou sports park. Located in quzhou, zhejiang province, the park covers 570,000 square meters, including a 30,000-seat stadium, a 10,000-seat gymnasium, a swimming pool, a complex of buildings, an outdoor training ground, an athlete service center and experience center, a science and technology center and a children’s palace, with a total construction area of 390,000 square meters of stadiums and supporting facilities.

The project has now completed the overall deepening design and is under construction, with stadium construction expected to be completed by 2021. When completed, the quzhou sports park will be the world’s z-largest cladding complex.

Quzhou is a famous cultural city with a long history, beautiful scenery and a forest coverage rate of 71.5%. The project site itself has a natural undulating slope and lush vegetation. In mad’s design, the idea of a “Sports park” Was born, which respects and considers the character of the site itself, the culture of the city, the relationship between the buildings and the buildings, and the relationship between the buildings and the city boundary.

The buildings are hidden, the façade disappears and is covered with greenery, becoming the landscape itself. The white lines carve new curves, part of which actually carry the function of a pedestrian walkway. The slope of the façade becomes a new place for the public to play sports, climb and ascend, and the lawn at the gentle slope can also be a place for people to rest after sports. It has become a new public space in the city. 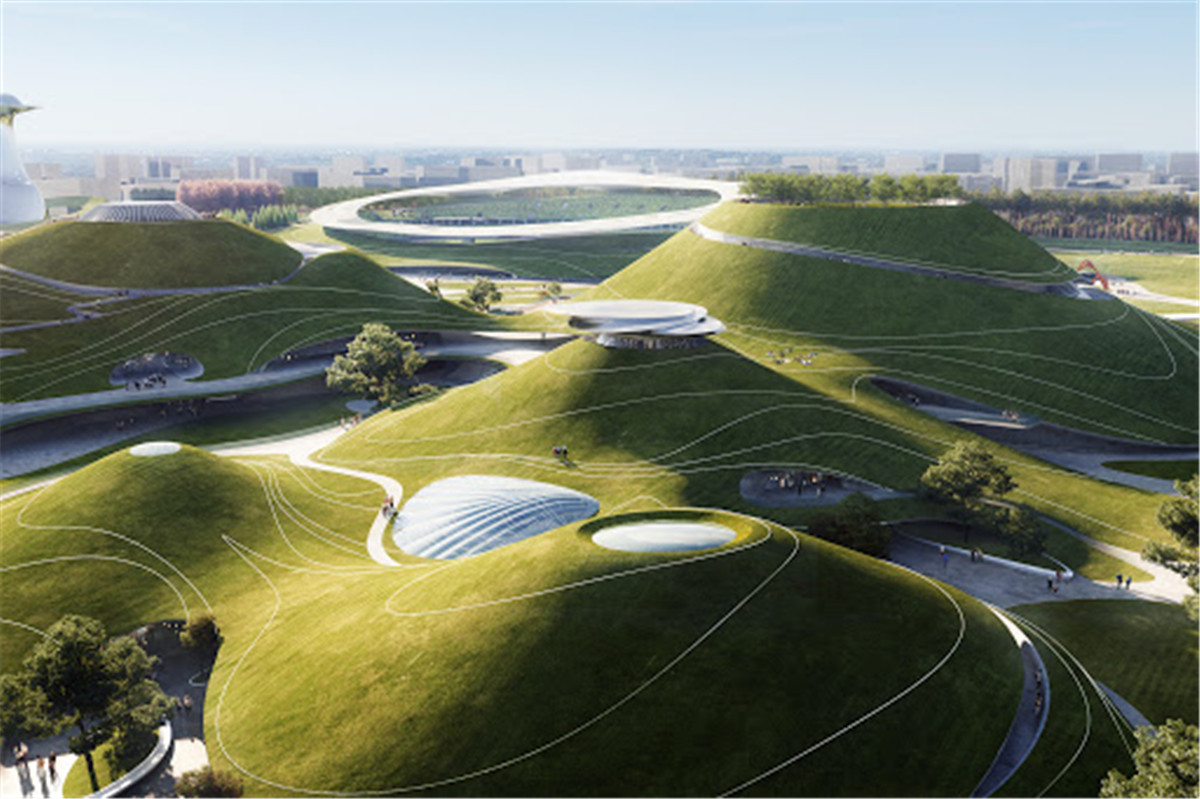 The monolithic pavilion is integrated with the park, and the slope of the site and the meandering walkways are softly layered and three-dimensional. In the complex, there are multiple platforms to enjoy the beautiful scenery of the park from different angles, while the skylight on the top of the building, which was originally used to introduce natural light into the interior, has become a new viewing point for the public after climbing, breaking the boundary between indoor and outdoor.

The huge grandstand structure of the 30,000-strong stadium is hidden and the building volume disappears. The outstanding visual effect of the storm cover on top of the stadium, abandoning traditional design techniques, through the choice of materials, the design of the structural nodes themselves, in addition to meet the practical function, but also attempts to achieve a new aesthetic purpose. It becomes a device, such as clouds light, floating on the stands, forming a reflection on the lake, for the jogging, strolling public, reflecting a scene.

The structural drop point of the storm cover to the top of the grandstand is reduced to z few and z small, achieving a z large span and allowing people to still feel like they are in the natural environment while watching the game.

Spectator admission ring corridor. It is kept as clean and transparent as possible, giving people a good feeling and experience when entering the stadium.

Fair-faced concrete is used for both the spectator perimeter corridor and the stadium sheet wall.

Ten thousand stadium “In the mountains”

The interior dome of the ten thousand people gymnasium hides the design details within the structure, and the smooth canopy is made of concrete shell structure with a span of 130 meters, and all the sports lighting inside the stadium is integrated and embedded in the ceiling structure, which ensures the simple and complete expression of the beauty of the structure itself to a great extent. In addition, the gymnasium has been carefully designed and specially considered in terms of acoustic design.

Keeping the design consistent from the inside out, the monolithic building forms and interior spaces are organically integrated.

In the design of the swimming pool, each main functional space is a separate “Bubble”. The three “Bubbles” Are grouped together with the center of the circle in a straight line, forming the space and structure of the building and creating a sense of sequence of continuous spaces. The spheres are also kept circular for economic reasons, reducing the cost of the structure to z-low. The design echoes the elements of water, “Making space, forming a whole”, and completes the design in a simple and pure way, rather than considering the interior decoration again with a new decorative logic.

The details of the arena’s lighting were also carefully considered in the design, with arcs and curves arranged to ensure the lighting function, echoing the interior design concept of “Simple and pure” And emphasizing the sense of sequence and interior dome lines. At the same time, many “Openings” On the top of the building bring in natural light.

The “Earth” In the interior of the swimming pool

Mad’s plan for the park includes not only pedestrian trails, but also a large number of bicycle lanes. Some of the lanes are express lanes that are integrated with the city streets, allowing even daily commuters to walk through the park and enjoy the beautiful scenery as they move through the woods.

It is hoped that the sports park will not be a closed “Theme park”, but will be truly integrated into the city and citizens’ daily lives. 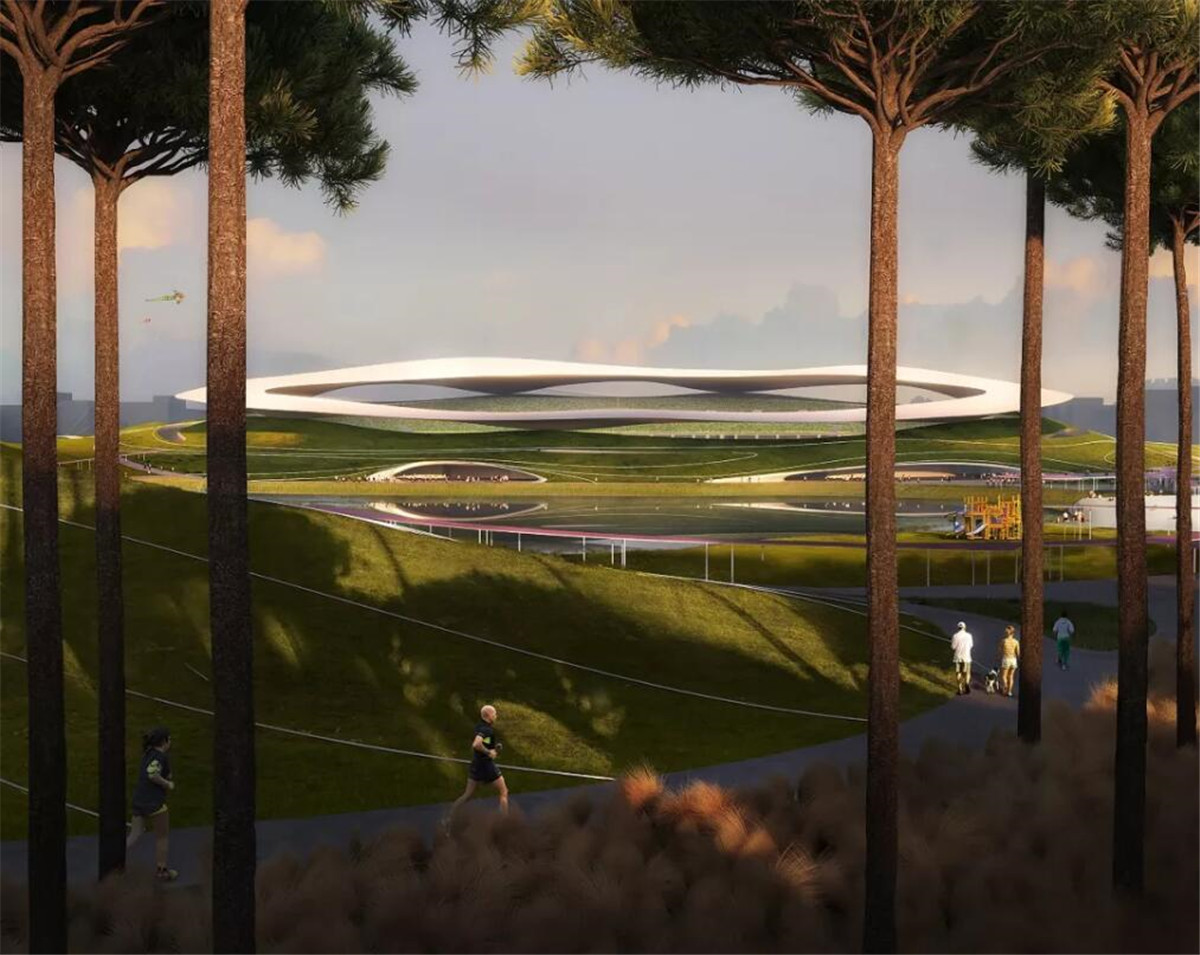 Complex technical problems will eventually disappear into aesthetic appeals and human behavior. With imagination as the driving force, to make the places dedicated to sports also become leisure activities for people’s daily life, to make buildings integrate into parks and become landscapes, to transcend practicality and functionality and express aesthetic demands, is competition, life and art.

What i’m after is something emotional – whether it’s a small building, a large public building, or a spatial environment on an urban scale, as long as it makes people feel and resonate in some way, it can be said to have ‘humanity’.